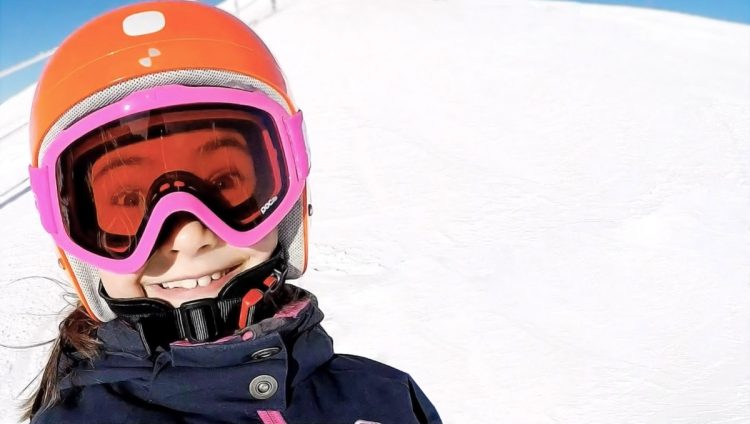 Freedom Snowsports kids ski awards system has 9 levels, here are the descriptions of what each level means. As well as what a skier at each level is able to achieve.

A brand new skier, getting used to moving around in their boots and on their skis. While getting used to a new snow covererd world. They are gliding in a straight line and stopping on the nursery slope.

What can a one star skier do?

Put skis on, and take skis off again. They can move up a small section of the nursery slope and ski down in a straight line. While controlling speed by ploughing.

Where can a one star skier ski?

On short easy nursery slopes with a natural run out.

This is the first moment where we get around the slopes, learning to turn the snowplough to control speed.

What can a two star skier do?

Ski using snowplough turning to control speed, and direction. They can make wider and narrower turns and can use a ski lift. Two star skiers can choose a safe route and avoid other skiers, and they know where to stop and wait safely on a ski run.

Where can a two star skier ski?

This is the first moment where the snowplough starts to change and has some parallel moments.

What can a three star skier do?

Make a series of linked turns where the turns start with a snowplough and then finish the end of the turn with skis becoming parallel.

Where can a three star skier ski?

The skis are almost parallel, there is a small snowplough at the top of the turn but the skis naturally steer parallel through most of the turn.

What can a four star skier do?

Ski smooth and rythmical turns while balancing against the outside ski earlier in each turn. When making plough-parallel turns, the skis naturally become parallel by the middle of the turn. Sometimes even before the middle of each turn [the fall line].

Where can a four star skier ski?

On all green and blue slopes.

The skis are now turning parallel through all turns, all the time. This is the pillar of skiing where we start to experience differnet parts of the mountain and different types of parallel turns.

What can a five star skier do?

Turn both skis simultaneously and consistently (parallel turns). They can descend a run on thier own and select their route using round parallel turns.

Where can a five star skier ski?

On all blue slopes and some easier reds, all while in control. However, steeper red runs are still a challenge.

Learning to use a pole plant to help with balance and timing, skiing faster and using smoother arcs. Sometimes able to ski turns that leave 2 clean lines in the snow (carve) around part of the turn.

What can a six star skier do?

When parallel turning they can use a well coordinated pole plant for timing, and the turns are becoming smoother and more rhythmical. My skis sometimes carve, leaving tracks with 2 clean lines in the snow around some of the turn.

Where can a six star skier ski?

I can ski on all blue runs, and most red runs including some steeper red runs.

Making parallel turns more versatile, from carved to skidded. Using a variety of sizes, shapes, and speeds of turn. All while being able to ski on a wider variety of challenging slopes in good conditions.

What can a seven star skier do?

Make a variety of smoothly steered arcs (carve or skidded) with a well coordinated pole plant. As well as skiing various radii of turn on a variety of slopes including the more challenging when in good conditions.

Where can a seven star skier ski?

Skiing comfortably all red runs including the more challenging when in good conditions.

Skiing skilfully on all groomed pistes and some varied terrain such as un-groomed slopes and easier bumps lines.

What can an eight star skier do?

Ski a steep and narrow run making short rhythmical turns, in control of speed, well balanced, in good posture and with a well timed pole plant.
On shallow green/blue terrain can carve cleanly, turning from from edge to edge without skidding. Using only the shape and sidecut of the ski to change direction. There are 2 clean tracks in the turns without any skidding.
Can ski on some un-groomed slopes in good conditions, continuously linking turns. As well as skiing some easier bumps lines linking skidded turns.

Where can an eight star skier ski?

Red and black runs which are groomed, or have some small bumps. Some easier un-groomed slopes in good conditions.

Exploring the mountains with a wide variety of skills and techniques on all pistes and off of the piste too.

What can a nine star skier do?

On almost all blue terrain can carve cleanly, turning from from edge to edge without skidding. Can ski a wide variety of round, skidded turns on all pistes, all gradients, and in all conditions.
Perform a fall line descent on an easy to medium bumps field, in control, in good posture, with a well timed pole plant.
Perform continuous, linked, rhythmical turns in fresh snow off of the piste, leaving smooth round tracks.
Descend a piste covered with uneven, soft, cut up snow, making continuous linked rhythmical arcs of small to medium radius.

Where can a nine star skier ski?

All marked pistes open to the general public, off of the piste in good conditions.