A Guide To Ski Shapes, and How They Work

Home » Info » A Guide To Ski Shapes, and How They Work 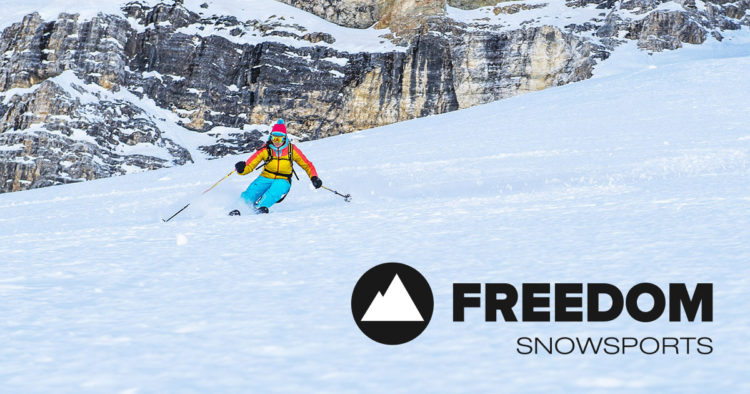 Now before we get going, this is not supposed to be a physics lesson. Just simple, useable information to make it easier to select a ski for an intended purpose. So you can enjoy getting more from your skiing.

On most piste skis a regular, positive camber covers the entire length of the sidecut. Along with the skis stiffness, this characteristic provides the most edge grip possible on hard packed piste. Mainly because the ski is under more tension and “bites” back down into the snow. Therefore most piste focused skis, and all racing skis use regular camber. This shape is much harder to work off piste and offers much less stability when sunk into soft snow. Due to the tip and tail wanting to push downward into the snow more. The Elan SCX is an example of a ski that uses regular camber.

This characteristic is the opposite of positive camber. A fully rockered ski is flat under foot and rises upward to the tip and tail. This shape stops the ski diving in soft snow and instead keeps the skis “seeking” the surface. Which makes skiing off piste considerably easier, giving better stability and float in powder. Consequently this shape provides little to no grip or stability when skiing on piste. Due to the fact that the raised portion of the ski gives less contact with the snow. Learn more with us with some Chamonix off piste skiing.

The two characteristics of positive camber and rocker can be combined in different proportions. This is to produce a variety of pros and cons. Aiming to move the bias of the ski to include various amounts of the opposing advantages mentioned above. Skis that use rocker at the tip and tail can have a section of positive camber in the middle area of the ski. For example the Elan Ripstick series are skis that use an emphasised camber and rocker combination.

The length of each of these sections can change, making the area of positive camber longer or shorter. Including moving the centre of positive camber further towards the middle or tail of the ski. The length and height of the rocker sections can change, as well as the length of the positive camber section. This means that different skis with this shape can be biased more towards riding powder but still provide some grip on hard packed snow. As well as biased more heavily towards piste skiing, and providing some stability in softer snow. Wherever the bias is moved to, there will be a compromise that the skier will need to compensate for with their ski technique. Learn more in our Chamonix ski lessons, or Megeve ski lessons.

If you look at most skis you will see that they are wider at the tip and tail than the middle. This “hour glass” shape is referred to as sidecut (Imagine cutting a curve out of the side of a straight plank). A ski’s sidecut is normally expressed with three measurements in millimetres. Giving the tip width, waist width, and tail width. These are normally written somewhere on the top side of the ski.

This hourglass shape, or sidecut is so that when the ski is tilted onto an edge on a hard packed surface (piste). The ski bends into a curved shape and will lead the ski around an arc. This is the principle used when skiing a carved turn. This curve will have an intended size, or radius of arc depending on the shape of the sidecut. Which gives the ski a larger or smaller turn. These skills are easy to learn with us in our Chamonix private ski lessons, or Megeve private ski lessons.

The radius of turn that the sidecut will produce is usually written on the top of the ski somewhere. With a measurement in metres and the letter “R” or “Radius” next to it. A ski with a large sidecut will yield a smaller turn radius, making shorter tighter turns when tilted onto its edge. Whereas a ski with a smaller sidecut, will yield a larger turn radius, making longer turns.

The turn radius of skis can vary largely. As a rough guideline; 10-13m Radius is a small turn and quick turning ski. 14-18m radius has some more stability at speed as well as ease to engage into a turn. Beyond this radius, the skis will take longer to turn, and will make larger arcs on a hard packed surface (piste).

When the skis move into a soft surface and sink, the skis can bend from tip to tail much more. And no longer relies on the sidecut in order to bend into curved shape. Therefore the skis are less dependent on the turn radius. So in softer snow a much larger turn radius of 20+m is more beneficial. Because the ski can bend much further and create a turn radius much smaller than stated. And therefore a ski with a small turn radius can become ‘twitchy’ or less stable in soft snow. This is not a ‘show stopper’ and can be compensated for by the skier’s inputs. 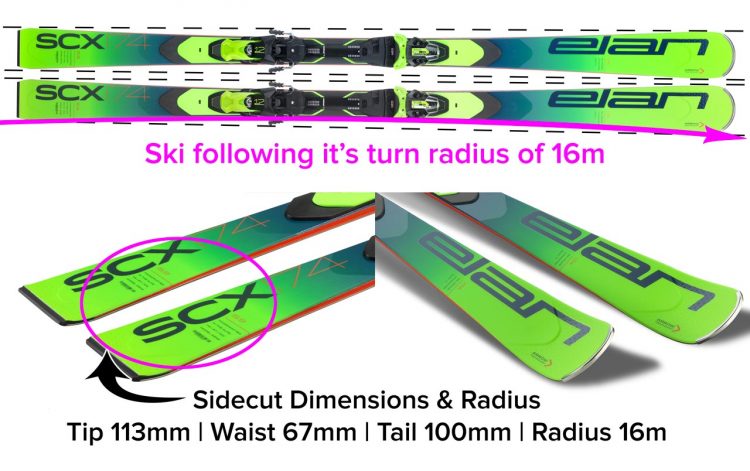 In general, a firmer/stiffer ski is more stable and powerful at speeds. Offering more grip, control, and response. If the ski is too stiff for the skier, then the ski can feel unresponsive or difficult to initiate a turn. Especially narrower corridors, or more modest speeds.

A softer ski provides easier turn entry at slower speeds. Also it releases from a turn more gently and is more forgiving. If a ski is too soft for a skier it will likely feel and unstable.

Flex pattern refers to the stiffness of the tip and tail of the ski. Traditionally, race skis have a stiffer tail for power exiting the turn. For versatility through bumps, powder and piste, most skiers prefer an even flex pattern that bends smoothly into a rounded turn.

Choosing the right stiffness of ski is very much dependent upon knowing what you want type of skiing you want it to perform.

There are two basic characteristics involved with the length of a ski. Which are stability and ease of rotation. A longer ski will feel more stable at speed and in softer snow. But will take slightly more effort to rotate, and vice versa for a shorter ski. At this point it would be handy to explain swing weight.

Swing weight is the amount weight distributed towards the tip and tail of the ski. The heavier the swing weight, the more effort it takes to make the ski pivot. Thus increasing the ski’s stability in a straight line. Skis for high speeds generally have a higher swing weight than those designed for quick turning.

Heavier skis are of course harder to throw around, but track against the snow better. The skis do not get deflected by chopped snow and bounced around as much. Giving more control over the edges. This is why most race skis are quite heavy. Beginners skis tend to be lighter as they need to be moved around easily, the same as freestyle skis. Because they need to be able to spin and manoeuvre with as little effort as possible. Consider the trade off again as described above in length and swing weight; stability vs manoeuvrability.

The width of a ski can make a difference to how well the ski floats in powder and soft snow. Conversely, how easy it is to tilt and maintain edge angles.
To increase the surface area of the ski’s base, a ski is made wider. Which in turn puts less pressure into the snow underneath and makes the ski float better in powder. This is why powder skis are much wider that piste skis.

However the width of a ski also effects how easy it is to tilt and hold the ski against an edge on a packed surface. With it being harder to maintain edge and grip on a packed surface the wider the ski becomes. Therefore piste skis where edge grip on a packed surface is very important, are normally narrower. The current trend is for manufacturers to make all-round skis a bit wider so that they are better in soft snow conditions. But not so wide that there is any major effect on their handling abilities on packed snow.

Consider using a crude benchmark, if the ski’s width under the foot is wider than your boot it will become much more difficult to maintain grip on a packed surface. But will offer amazing stability in soft snow. And when the ski is narrower than your boot it will be easier to maintain grip on a packed surface. A ski’s width is the middle number of the three measurements expressed for the ski’s sidecut/shape. Given in millimetres as tip width, waist width, and tail width. You can find these figures usually written somewhere on the top side of the ski.

Now with that benchmark in mind, if the ski is wider than your boot directly under your foot. Its not intended to ride packed snow or piste. And the forces involved in keeping the ski against its edge on a packed surface are much higher. This can cause more strain on your joints if you ski this type of ski on a piste all the time. Its nothing to panic about, just consider the type of skiing you will use the ski for.

Really the point being made is to choose your equipment based upon its intended use. And it is of course totally fine to use a ski in terrain and turns that oppose its intended use. As long as you are prepared and technically able to work it in a way that will compensate for its characteristics/properties.

Hopefully thats some straight forward information about the different properties of ski shapes and technologies. Giving you useable information to select the right ski, or skis for your upcoming trips. If you would like to learn more join us at our Chamonix ski school or Megeve ski school.