Epic Skiing On The Monch 4107m

Having spent some time enjoying ski mountaineering and ski touring in Chamonix at Freedom Snowsports. We decided to take 10 days for a ski mountaineering trip. Which took us through the Bernese Oberland (Bernese Highland) in Switzerland, starting from Lauterbrunnen. The many 4000m+ peaks that abundantly surround the ski touring routes are a perfect pairing.

Our trip had a wish list of the following summits: Mönch(4107m), Jungfrau(4158m), Eiger(3967m), Finsteraarhorn(4274m), Fiescherhorn(4049m), and Gross Grunhorn(4044m). With the first three summits planned to make ski descents (conditions permitting). The weather forecast contained good news for the foreseeable days. And so we were optimistic about our arrival at the Mönchsjoch hut the very next day.

The first day we planned to move up to the Mönchsjoch hut at 3650m and rest there. Aiming to at least begin acclimatising. Then on day two we would ascend the easier summit of the Mönch. However while on our way to the Mönchsjoch hut, the forecast seemed to have changed somewhat. Predicting gale force winds, and plenty of thick cloud at altitude to set in by the end of the day. Fortunately the day itself was delivering clear blue skies and nothing yet to be seen on the horizon.

So we decided that with the forecast set to change, and the Mönch right there. With only a few hours of good conditions potentially remaining. It seemed that the best plan was to make the most of the moment. Ignore the planned acclimatisation, and just get on with the easier summit of Mönch now. And if the weather did close in we could retreat at a steady point. Taking comfort in the fact that we would have making the most of what was available. So we ignored the hut and continued.

As things progressed the ascent was straight forward and conditions were excellent. With good solid snow that made comfortable work with crampons. And clear skies making the views superb. As we traversed the ridge to the summit, we could see in the distance to the north. A big, dark weather front that was heading our way. Just as we arrived at the summit of the Mönch the winds began to pick up somewhat. So we took a very quick, obligatory trophy photo. And without rushing, it was time to get a move on with the descent.

After traversing back across the summit ridge to the eastern slope of the Mönch. It was possible to start linking up some short sections of steep jump turns. We were proudly making quick work of the descent. With a contradiction in appreciation, the apparent speed was only due to the comparison of the slow previous uphill pace. As we approached the bottom section of the descent slope moving around the large bergschrund. The slope eased out onto a plateau. We were then able to fully welcome back that relentless nausea and headache. Our penalty for ignoring acclimatisation. However that said, as we arrived back at 3600m and evacuated our stomachs. We did appreciate that the encroaching weather and wind immediately arrived. So we had indeed made the most of the available weather window. Enjoying excellent conditions on both the ascent and descent. We had a very short ten minute skin back to the hut in the wind, cloud, and weather. The visibility had quickly reduced to 5 meters, and the wind made speaking difficult. Never mind the two handed door opening technique to enter the hut, saving the wind from ripping the door out of our hands. We reset the door bolt and made our way into the hut to check in with the guardian. Then a quick sleep before dinner in an attempt to allow our bodies to start acclimatising. 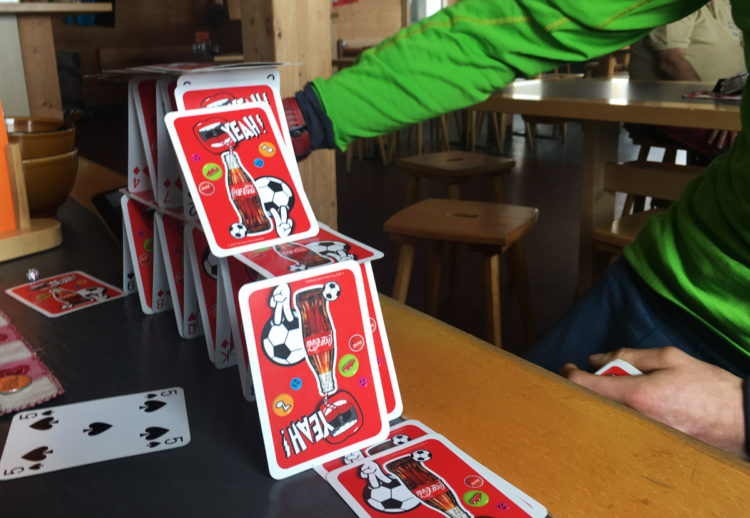 That night, and the following morning, the weather and wind proceeded to get worse. With gale force winds battering the hut, the remaining occupants went round in circular decisions. Weighing up staying at the hut waiting for clear weather, versus abandoning plans and heading home.
We decided to stay for another day and see what the weather would do. And if forecasts would produce another last minute change. Alas, the weather stood fast, and remained. We were the last to leave the hut and head home feeling empty handed. The grand plan had not come to fruition, and is currently parked for another time. We left with a nice consolation of skiing the Mönch, which I highly recommend. And with the comfort of good decision making.